EMMERDALE fans could see Mandy Dingle carted off in handcuffs in upcoming weeks as Paul Ashdale’s plan to get rid of her works.

After 17 years away, Mandy Dingle (played by Lisa Riley) returned to Emmerdale last year and she brought son Vinny Dingle (Bradley Johnson) along too. After initially bringing trouble to Wishing Well cottage’s doorstep following them fleeing from a casino money heist job which had gone wrong, the two have settled into village life. But this week, a blast from their past will upset the apple cart and the actress who plays Mandy spoke to Express about the storyline.

A few weeks ago, Vinny started working alongside Paul Ashdale (Reece Dinsdale) at the scrapyard.

Little did he know the man who called himself Alex was in fact his biological father, and in upcoming scenes, the two will spend more and more time together.

But how long is it going to be until Vinny finds out his new friend is family?

Reece who plays the newcomer told Express “It’s a couple of weeks before Vinny realises who Paul is.”

But what are going to be the repercussions?

“Mandy’s thinking ‘who is this? Who is this guy?’ It’s threatening she’ll find out but never once at that point does Mandy have a clue that Paul hasn’t listened to her because initially she just goes, ‘leave, go’ – and Mandy truly believes he’s gone.

“And we have quite a few episodes where he’s constantly on his phone and laughing and it’s winding Mandy up.

“I think she’s a bit jealous ‘who’s this Alex who’s taking over your life, you love him, why’s he so fun?’ 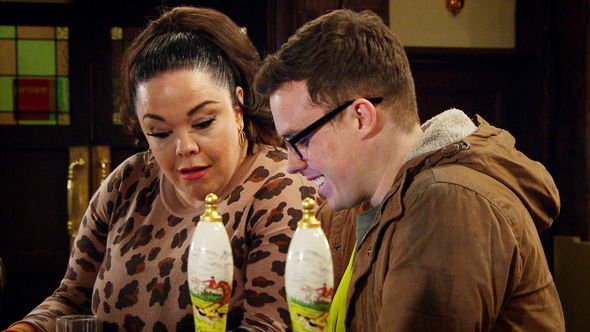 “We did a scene where Paul’s spying while Mandy’s at the scrapyard with Aaron because Mandy starts thinking that Aaron’s manipulating him and using him for money and unbeknownst, Paul’s hidden.

“Vinny keeps saying ‘come back and meet my mum’ and Paul keeps saying ‘you’re all right’ and then he gets the shock of his life when Mandy turns up at the scrapyard,” Lisa continued.

As for whether or not Paul is only in the village for Vinny or Mandy as well, Reece answered: “There’s a question!

“I would be guessing at that at the moment because you can only get what you can get from your scripts and what you’ve been told.

“But my hunch would be, yes – because he comes back and is full of admiration for what she’s done and whatever reason he went away, it wasn’t her.

“And so my hunch is that yes he’s very much coming back hoping that Mandy will take him back. But primary reason is Vinny,” Reece added.

With Reece suggesting Paul is in the village for Mandy too, is he working for the casino boss who Mandy and Vinny attempted to steal from?

Perhaps this is Paul’s way to get Vinny back and get rid of Mandy for good?

Lisa took over: “Jane our Executive Producer made a great point in that she said ‘when you remember Mandy, 17 and a half years in an awful long time that we didn’t see her.’

“So avenues where we can go with this, there are so many [possible storylines], and of course everyone starts speculating as they always do, think they’ve worked out the ending.

“But I think for us as actors, that’s brilliant because there’s going to be so many layers of who he is, that’s going to come to fruition,” Lisa said.