EMMERDALE resident Will Taylor could finally be about to pack up and leave the village after his kind gesture for Harriet Finch goes horribly wrong. How far will Will go to prove his love for his cheating girlfriend?

Emmerdale’s Will Taylor (Dean Andrews) is set to be left dumbfounded in tonight’s episode, after his plans to make up with partner Harriet Finch (Katherine Dow Blyton), go horribly wrong. In scenes set to air this evening, he will go out of his way to try and rekindle their romance, but little does he know she and his nemesis DI Malone (Mark Womack), shared a passionate romp in the vestry behind his back.

Monday’s episode saw the vicar and the bent cop who has been terrorising Will, Cain Dingle (Jeff Hordley) and Billy Fletcher (Jay Kontzle) since he arrived in the Dales earlier this year, get a little too close for comfort after he paid her a visit at the church.

It turns out the pair used to be lovers back when Harriet was in the police force, but she’s done all she can to prevent Will from finding out the truth.

And as fans may have guessed, it wasn’t long after their past connection became apparent that they both gave into their urges they should have left in the past.

As Malone buttoned up his shirt, the two were nearly rumbled by Will’s daughter Dawn Taylor (Olivia Bromley), and Harriet informed him that their affair was a mistake.

She returned home full of regret, but will it really be the last we see of Emmerdale’s latest love affair?

All the while his girlfriend is messing around with his arch enemy, Will is plotting to try and win back her affection with a sweet gesture, after all he’s put her through.

After being stood up by Will in the cafe, Harriet is left in a bad mood, but she soon runs into a friendly face with a shoulder to cry on.

She suggests to Moira Dingle (Natalie J Robb) that they go for a drink and they can both discuss their woes in life over a bottle of something strong.

But Will soon turns up and announces he needs Harriet’s assistance urgently.

“I need you back at home,” he exclaims. 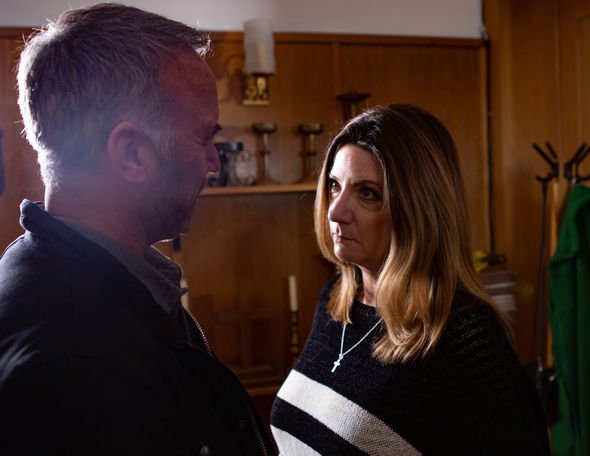 It turns out he had sent her to the cafe as a diversion so he could prepare a surprise dinner, but the scorned vicar was less than gracious.

Could the result of her constant refusal to accept his apologies drive him out of the village for good?

After she finds out there was no emergency after all, she brands Will a “selfish liar” – but is this the guilt talking?

As his romantic plans go put the window, Will takes more serious measures in order to prove his love to Harriet and show her how serious he is about making their relationship work.

Next week, he’s set to lay all his cards on the table and ask for her hand in marriage.

After her little outburst over his gesture of remorse, it seems she’s also keen to let bygones be bygones in a bid to keep Malone out of their lives for good.

While some residents are left surprised by the news of the engagement, Will himself is overjoyed and wants the whole village to join them for a celebratory drink in the Woolpack.

Guilt stricken Harriet couldn’t be less willing, as she desperately tries to deflect the attention.

Is she worried Malone will blow the lid on their affair in one final attempt to ruin Will?

Or will her sins lead her confess all about her recent dalliance with the villain?

If she comes clean, there will be no going back for poor Will.

Could this be the push he needs to escape the village and Malone for good?