EMMERDALE survivor Rebecca White might make a return to the village which harbours so many unhappy memories for her, and there is a chance she is going to be armed with bad news for Aaron Dingle. Will he be permanently cut him out of her and her son Seb’s life?

Rebecca White (played by Emily Head) is set to make a shock return to the village and Aaron Dingle (Danny Miller) will feel the force of her return the most, as she will prevent him from seeing step-son Seb.

The last time Emmerdale fans saw Rebecca White was in November 2018, after she had endured a torrid few months.

In the previous year she had been involved in a fatal car crash, one which destroyed her family.

Her father Lawrence White (John Bowe) was killed in the collision with an articulated lorry.

Chrissie (Louise Marwood), her half-sister, later died from her injuries, while Rebecca remained in a coma.

During her convalescence it became clear she had suffered a traumatic head wound, which left her with a permanent brain injury.

This came to light when Aaron was forced to smash his way into her home to rescue Seb, after Rebecca had left a pan of oil burning on the stove.

His bravery led to her asking Aaron and Robert Sugden (Ryan Hawley) to help care for Seb.

But Rebecca was far from safe, as she became a victim of Emmerdale killer Lachlan White (Thomas Atkinson).

Her nephew took her hostage and held her captive for weeks.

Locals spent hours searching for her, as she had vanished into thin air without a word.

At first Lachlan kept her in a dilapidated shack, before enlisting the assistance of a nurse who believed she had been sectioned.

After weeks of working into the confidences of the nurse, Rebecca eventually escaped and was reunited with her family. 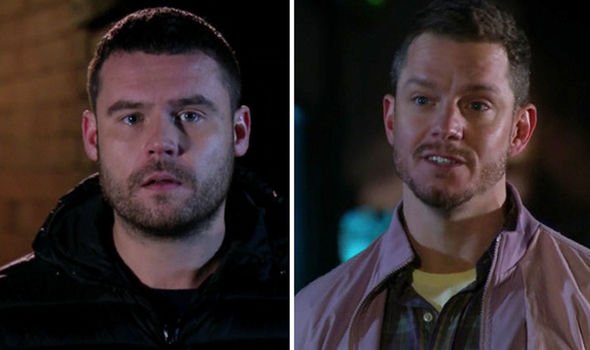 Understandably, she wanted to spend time away from Emmerdale in the aftermath of that trauma.

Seb has continued to remain in touch with Aaron – until this week, when Aaron learned Rebecca didn’t want Seb to spend time with him anymore.

This devastated Aaron, who continues to struggle without husband Robert, and he reacted to the news by heading out on the town.

To wash away the pain, Aaron spent the night partying hard.

Will Rebecca return to the village for good and make it her home again?

And, in doing so, will she try to forget all that has happened by cutting out everyone from her past?

Or will this drive Aaron to even further despair, as he’s ignored yet again by someone who used to be so close to him?